Bessma Momani: After Afrin, Inklings of a Confrontation between NATO Allies

The West’s support of the Syrian Democratic Forces – a mere rebranding of the
Kurdistan’s Workers Party (PKK) – is intimately connected to Turkey’s Afrin offensive, says Bessma Momani in an opinion piece published in The Globe and Mail. Although Turkish President Recep Tayyip Erdogan affirmed that this military campaign would be brief, Momani asserts it is bound to face “fierce resistance” from the Kurds residing in the mountainous region. And, should Turkey advance beyond Afrin, it is likely that it will come face-to-face with U.S. troops; diplomatic resources should be deployed in order to avoid such a confrontation between NATO allies, she argues.

Bessma Momani is a 2015 Trudeau fellow and a professor in the Department of Political Science at the University of Waterloo and the Balsillie School of International Affairs. Read the full article here. 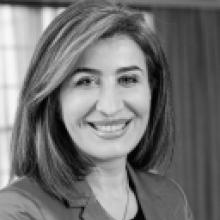