— An Academic Job Application Document, as a Poem—

asked where I identify within the LGBT of LGBT Studies.

which is not to say anyone’s ME is free of, or beyond,

I told him I have a finger (usually two) in each pie.

[four and twenty trans boys baked and too high

Chairs are bad for the backside.

The next time he interviewed me,

in order to believe, he needed to see.

You dodged it last time,

but which one are you?

Coercion: the attribution of irony where

My name is A Boy Named Sue.

My identity is I Don’t Know What To Do But I Do.

while my gender is a song best sung in a round.

[sing a song of sixpence, Nana’s rye in a pitcher

job market kiss of death leaves us none the richer.]

The 90s saw me squat in Catholic pews

with a secret Jew history at home, which was

the blackberry gash around which one had to pivot.

We had a home and were white. Posthumously,

found an old speech dad wrote for a union convention in Cuba.

Opened with a joke about cigars and his bad spelling

cast no shadows over how much he let others

(that is, others than us) love him.

Did he ever have a job interview?

What do they ask boys with grade ten

before letting them work in the mailroom?

Would you recognize your kids now?

Did you ever exorcise that sore, sore muscle?

[Two yeses and a maybe, maybe.]

at the conference reception, eating his mini lamb pie

Some good boys get plum gigs but most don’t.

I bite my thumb at you, Sir, who fingers my stigmata faithlessly.

My body has long been public property. Who mortgaged me?

At my Edmonton YMCA, people fled to the front desk to say

they’d seen my penis flailing about in the women’s locker room.

Seeing is not so easy a business. Believing

is a miracle of weak eyes, wine, organs.

I told no chairs what parts

hang in these pants.

I didn’t get the job in LGBT Studies but

I drink no soured grape juice on no altars.

This is all just to say:

Yeah. Students. I cannot prescribe or predict what may be

my “potential for working with diverse student populations”

except to say that I bring my disintegrating self to work,

make only big mistakes, and allow the same. I show pain.

I grieve. I take late papers. I use written words to show them

that they can experience feelings and survive it. I know

I’m charmed, and cursed. I speak to them in incantation

via poems and comics and films and novels that are

zero degrees from their own knotted ligaments.

My potential contribution to diversity is to offer

the community the benefit of a doubting tomboy. 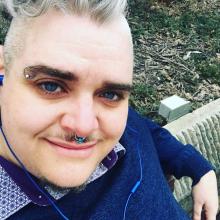