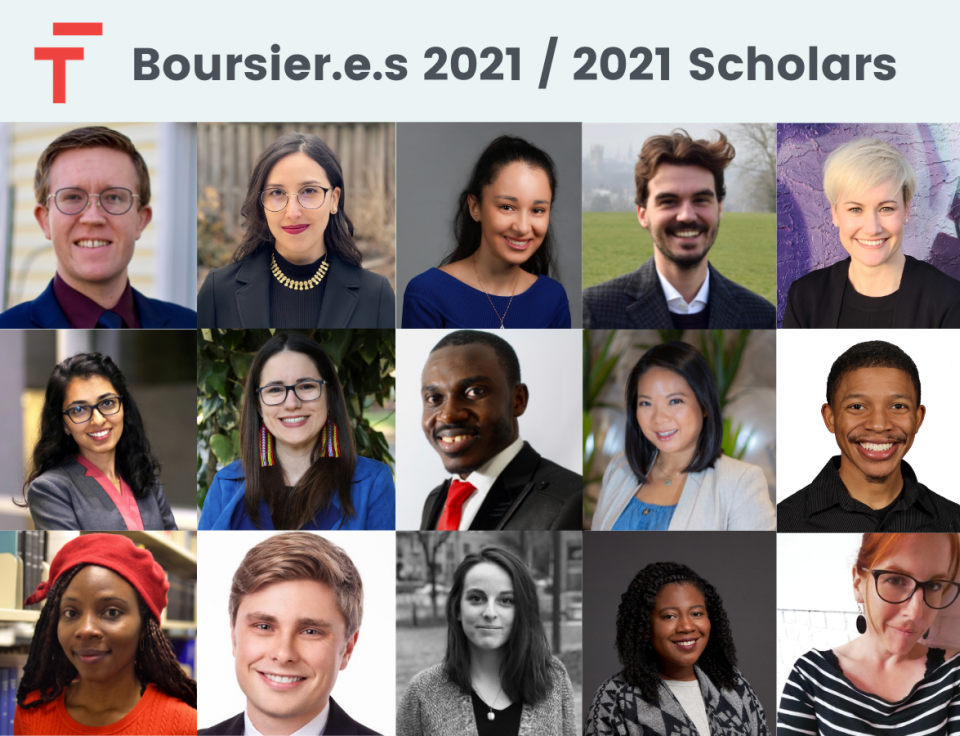 Fifteen leading doctoral researchers from across Canada and around the world have been selected for the Pierre Elliott Trudeau Foundation’s leadership program as 2021 Scholars.

These bold, innovative, community-focused Scholars are interdisciplinary and come from a range of disciplines, including medicine, religion, policy studies, international health, and law. They hail from all corners of the country and beyond, from Halifax to Winnipeg to Montreal and from Colombia to Kazakhstan.

Among these Scholarships, the Foundation is pleased to inaugurate the Mary-Jean Mitchell Green – Pierre Elliott Trudeau Foundation Scholar, which is awarded to an outstanding female doctoral candidate researching in the field of business.

The Foundation received 643 applications, interviewed 102 semi-finalists, and invited 36 finalists for individual interviews. Along this path, candidates responded to challenging questions, participated in group interviews, analyzed case studies, and were assessed by leading academics and Foundation alumni during their final assessment in March.

This remarkable group of 15 Scholars, representing 13 universities, were chosen based on their academic excellence, leadership and engagement, willingness to engage with a plurality of perspectives, and their agility and resilience. Diversity is especially well represented among the 15 Scholars, and a significant percentage of them are francophones. Of note, the group includes five Scholars hailing from leading international universities, in addition to those studying in universities across Canada.

“Our selection process is designed to unearth a different kind of academic leader,” said Pascale Fournier, the Foundation’s President and CEO. “Candidates are assessed not only on their academic abilities, but also their curiosity, creativity, entrepreneurial spirit, resilience, and their interest in and willingness to engage with a range of different opinions and perspectives.”

The Scholars will embark on a three-year leadership journey, rooted in the Foundation’s leadership curriculum, Building Brave Spaces: The Path to Engaged Leadership. This will guide Scholars as they learn to translate their research into action, as they learn how to become leaders of self, leaders among others, and leaders of systems. The leadership program, designed and delivered by the Foundation’s Fellows and Mentors, is based on six key leadership concepts tailored to nurturing public intellectuals.

Further, the leadership program for the 2021 cohort will be centred on the theme Language, Culture & Identity, allowing them to expand their horizons beyond their own field of study and to delve deep into a subject of critical importance at a time when interdisciplinary communication and openness are essential for rebuilding our global community.

These Scholars embody the Foundation’s commitment to the principles of Inclusive Excellence and Engaged Leadership, critical to meaningful engagement with communities across the country and to building progress around a plurality of perspectives. In the Foundation’s programming, this comes to life through Brave Spaces. These spaces privilege robust debate and celebrate difference. Recognizing that these can be challenging and sometimes uncomfortable discussions, they are supported by a safety net of mutual respect, strong policy, and the Foundation’s Code of Community Engagement.

Scholars have further committed to improving their skills in both official languages, familiarizing themselves with Indigenous languages, and actively volunteering in their communities on the road to becoming Engaged Leaders and public intellectuals.

Over the next three years, in addition to leadership training, the Foundation will provide 2021 Scholars with generous financial support, academic resources, mentorship opportunities, and personalized leadership training designed to help them effect positive change in their communities and academic institutions.

The Foundation is eager to welcome the 2021 Scholars to our virtual events, which will begin this week with presentations from notable members of the alumni community speaking on the relevance of the Foundation’s Four Themes. As travel and gathering limitations are lifted, we also look forward to resuming in-person gatherings, notably our Institutes of Engaged Leadership, with our newest Scholars and the rest of our community.